The concept and business idea firstly came about when local business owner (Sean Taylor) and subsequently founder of The UK'S Touring Music & Beer Festivals decided that his own small market town of Holbeach in Lincolnshire needed a positive boost by creating a family fun annual event that the community could look forward to and be proud of while raising money to support local charities or good causes. The idea was simple put together a 3 day Music & Beer Festival with a professional stage, sound & light engineers, invite local acts to perform and share the stage with headline bands, food outlets, fairground rides for children & adults, inflatables & outdoor games and obviously a great festival bar with lots of real ale, but like most ideas its easy to talk about and difficult to deliver in the real world. With lots of meetings, planning & discussions with all the local authorities The First Holbeach Music & Beer Festival was planned over the weekend of 7th - 9th August 2015 in the hope the weather was kind and the public supported the festival ...... It was a massive success selling over 2,500 tickets and raising over Â£9,500 for The Holbeach United Community Sports Academy !

We have had great success in the first 3 years hosting The Music & Beer Festival at The Holbeach United Community Sports Academy, but unfortunately this year our stars are not aligned to continue where we started. We are very proud that since our involvement with the Holbeach Sports Academy, we have donated, sponsored or fundraised over Â£25,000 helping towards the running costs and supporting the youth football academy. This is an achievement everyone involved should be proud of and we wish the academy all the best for the future. We believe it"s very important to keep the festival on the same date annually which has always been the first weekend of August whilst trying to keep the public entry cost as low as possible. We always listen to any feedback and want to deliver you all a great festival experience and to provide camping onsite is by far the biggest addition the public would like to see.

Taking all these factors into consideration this year will see the festival move to a new bigger venue just on the outskirts of the town to Kings Field, Fen Road, Holbeach PE12 8QF. We would like to personally thank Ashley King for allowing The Holbeach Music & Beer Festival to firstly continue and most of all expand for the local community to enjoy for years to come. So much work and energy is required to make these big events happen and we see how important the festival is to the people of Holbeach. Hopefully with all the continued support we are definitely putting Holbeach on the map and the event needs to continue because it"s one of the most talked about festivals in the area. Our ultimate goal is to one day have a famous act perform at the festival and with continued support from the local community and guests that travel from all over the country this won"t be long. The festival costs thousands of pounds to organise and its a balance trying to keep the public entry costs low with the standard so high and top bands applying to perform from all over the country. We do rely on sponsorship to keep things running and we"ve been very lucky in the early years and I thank every single sponsor that has ever supported the Holbeach Music & Beer Festival.

We are now attracting sponsorship endorsements from national companies but we still need lots of local business sponsorship to keep the festival financially viable. We would like to thank our main sponsor "The Old Exchange Holbeach" for being the main festival sponsor again and delivering the very best professional service in mobile bars for all occasions. We want to take the festival to the next level and operate a more professional approach but still maintain the local community relationships we have created so far. The Holbeach Music & Beer Festival has become a full time job for everyone involved and public demand requires the festival to expand and to be the very best possible. We have decided to work in partnership and operate as a business under a licensing agreement with "The UK"s Touring Music & Beer Festivals" this will relieve the pressure from our team and hopefully allow us to enjoy the festival like you guys!! The Holbeach Music & Beer Festival is now No.1 on google search when entering "music and beer festival" which is something quite staggering for our little town of Holbeach and another target completed by the hard working team behind the scenes. If you can help support the festival with sponsorship and want to see your business brand at the festival then please contact Sean Taylor or call Holbeach 01406 490265 / 07955 885030

We need sponsors to make the festival a success, can you help? Click here for information 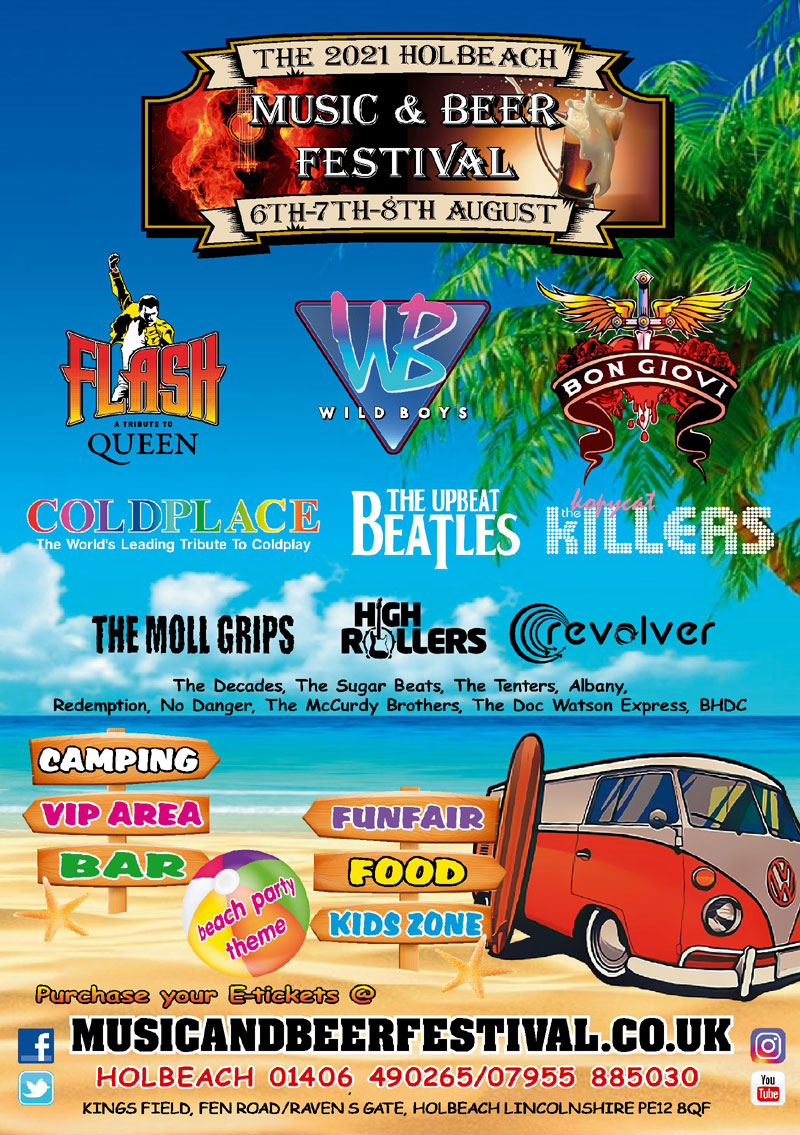 Look forward to one of the biggest and best live music and beer festivals in the South Lincolnshire area!

At the Holbeach Music and Beer Festival we will be bringing you some of the best live music
from the area alongside some of the the finest beers and ales availabile.